What are Tabletop simulator games? How much it will cost?

What are Tabletop simulator games? How much it will cost?admin 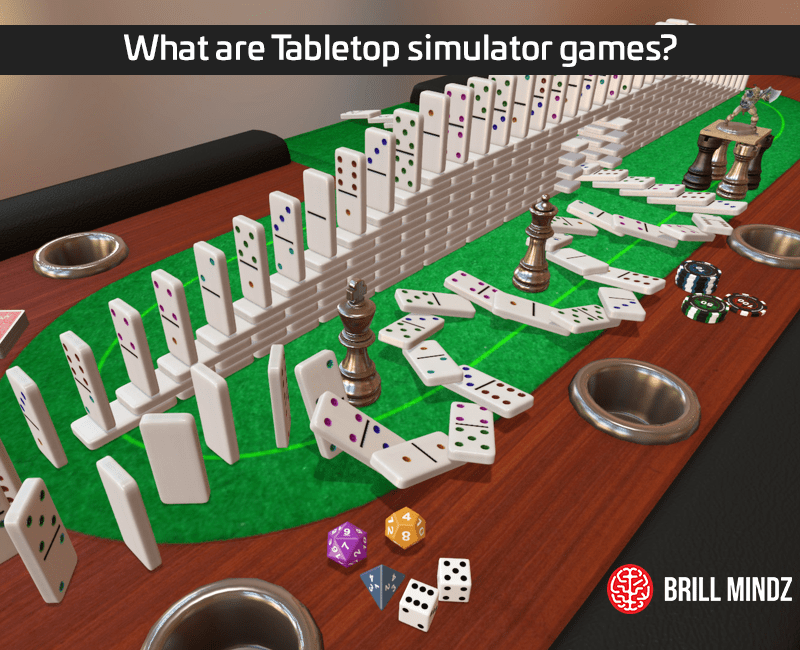 What are Tabletop simulator games? How much it will cost?

The world has transformed significantly with the advent of advanced digital technologies. With the outbreak of the Corona-virus pandemic, people are confined to their homes like before. This is due to the enforced lock-downs and quarantine measures implemented across the globe to stop the spread of the disease. Hence, usage of modern mobile apps and games have been increased among individuals. Different types of games are gaining attraction and huge downloads in the play stores. A Tabletop simulator games cost is a tool that provisions to play multiple games with your known ones at any part of the world, that is not possible on any other medium.

What are Tabletop simulator games?

You would want to play a game that you have designed yourself. A tool called Tabletop simulator will help you in this task of designing and uploading the game on the cloud. But you would be wondering how would you be able to play it as designed with anyone of your choice? Tabletop Simulator is an independent video game tool that lets players design and play tabletop games in a multiplayer physical sandbox. It was developed as the first project by Berserk Games with the aid of the crowdfunding campaign in February 2014 and released after a year. You will require a Steam account with a headset and microphone to play the tabletop simulator free games. There is a wide range of games right from vague card games to extensive RPGs and even computer-generated bowling lanes.

A major thing needed for a tabletop simulator is a robust PC setup even if you do not have a complete gaming rig. Nevertheless, the system comprises a large number of 3D objects floating in real-time. The actual details could be seen on the System requirements Steam page. Any gaming rig will be suitable along with any type of PC or Macs. After setting up the game, you must go through a Tabletop simulator tutorial that has complete information about designing, playing the game. Tabletop provides resources for easy games such as tabletop simulator poker, chess, backgammon, checkers, dominoes, parchisi, mah-jong, etc. There is also room for finishing the jigsaw puzzles or move around accordingly with a set of cards. It has built-in miniatures and dice set up for gamers who want to design their tabletop RPGs.

How to play Tabletop Simulator games:

It involves the creation of the game from one player and inviting other players to be connected with them. It is uncomplicated, to begin with, simple features but has all the possibility to make it complex relying on the type of design. Once you begin, you may click the create button from the main menu and selected player options. But you cannot ask the players to join a game directly but to be on the Steam friends list. You create the server and provide your name and password. The table simulator workshop and tutorial will provide you information summary about the involved controls.

Tabletop simulator reviews list unparalleled benefits in creating and playing the games you wish. They are:

1. Simple and easy to develop a prototype.

Another game creation process involves designing or swapping every part each time you want to make a definitive change. The tabletop simulator lets to easily change the image documents on the Tabletop Sim demo without any complexity.

2. Saving time and money on creating a prototype.

The majority of game development systems involve expensive setups and more time for creating the complete setup. But tabletop simulator could work wonders just with a paper and printer for creating or transforming any type of game. It will help in saving loads of capital and time on developing the prototypes.

3. Option to play and test online.

As Tabletop simulator offers you the chance to play online, there will be a huge opportunity to showcase the game with individuals. They may be having a healthy audience on diverse channels that could be a point for you to publicize your creation. Livestreaming option for online games provides good advertising for the game.

As mentioned above, there will be a wide range of audience to showcase your prototype. This is very crucial since you will not be able to get them interested in your game until they have a comprehensive look at it. The tabletop simulator provides you with a good chance to present the game to interested individuals without the need to build on expensive physical modes. Tabletop gaming is fundamentally an interactive and social movement. It lets the gaming enthusiasts play games that would not be possible in a real-time setting.

How much will it cost?

The Tabletop Simulator is useful in the times when the game app development is almost done. But you may need to test the graphics or want to playtest the game for any changes in the development. As the task will be tougher for making instant changes on the go after you develop firm graphics, it can be very useful to test them without any physical changes. The approximate game cost will be 10-20k USD if you associate with a reliable game app development company like Brill Mindz. The tabletop simulator could not be included in the actual development process and just be used for advertising purposes too.

If you are looking for an experienced game development company to design an exciting game for showcasing in Tabletop simulator your best choice is Brillmindz. They have a talented pool of game development experts who will ensure meet your necessities at reasonable charges.